Recently I have heard the radio playing a few songs I remember fondly from days of yore, and so I was inspired to go back to see if they were as good as I remember. Kids have a tendency to like almost anything, even if it is genuinely terrible, so to revisit such a thing in adulthood can potentially ruin your memory of it. But I’m willing to brave it. This will be the first in a series of blogs where I revisit my childhood in a similar manner.

If you were alive in the nineties, though many music acts of note existed, there is one I can be certain you could not fail to have heard about. Whether you wanted to or not. It could be said I jumped on the bandwagon, but I liked this group before they became as popular as they did. Right from the very first single (though it was their second that made me love them).

I have gone through a period of being ashamed to have ever liked them. But really, who cares what kind of music makes people happy?

Way back then, I was twelve years old, and head over heels in love with Melanie Chisholm. 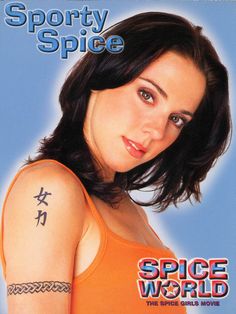 ‘Wannabe’ was obviously their first and most famous single. I enjoyed it then, but looking back on it now, it’s actually quite annoying. Perhaps that is why they needed to release ‘Say You’ll be There’ before I took much notice (and maybe the accompanying video. I had never seen anything like that before).

I remember receiving the album on tape (could be as a present for birthday or Christmas), possibly before ‘2 Become 1’ was released. The specifics are hazy, but it was definitely a tape. You know, one of those plastic things you feed to your player that it sometimes likes to spit out.

And from then on, I was hooked.

My thirteenth birthday consisted of a packet of Spice Girls branded Quality Street, a CD player, and Spiceworld to play on it. At some point I drank nothing but Pepsi, just to collect enough ring pulls to send off for an exclusive single. I got a magazine where I would stare lovingly into the eyes of Mel C. I looked forward to the movie, and though I never got to see it in the cinema, I did manage to catch it elsewhere. Whenever they appeared on the telly, I would try to watch them. My family was not well off, so I was never able to attend any concerts or buy all the merch, but I doubtless would have if I could. And I was devastated when Geri left, and could not consider them the same band from then on.

I followed the girls’ solo careers with mild interest afterwards. Geri’s was obviously the most prominent, though I wasn’t too impressed (probably still resented her). Emma’s was pure pop, which I kinda liked, but she fell off my radar a little. Mel B, and Victoria went nowhere, and their efforts did not impress me at all.

But this teenage boy remained attached to Mel C. I never bought any of her albums, but I loved the stuff I heard. At some point I’ll have a look at her works, but that is not the focus of this article.

So, let’s take a trip back to the nineties and see whether the Spice Girls have retained their magic, by listening again to their first two albums.

This is, as I said, quite an annoying song. It was never my favourite anyway, but it is the one they are most famous for. And as such, this does not hold much nostalgic value for me.

Say You’ll Be There

What the heck did they think they were doing with this video?! Were they trying to corrupt an innocent preteen boy? Seriously though, this song still holds up, and will always transport me back to my boyhood.

Again with the corruption! This was, at the time, the sexiest damn song I had ever heard. And remains a great tune.

I vaguely recall this song, but if I were to have heard it recently before I re-listened to the album, I doubt I would have remembered it. I may have recognised it as Spice Girls due primarily to Mel’s distinctive vocals, but would have probably placed it in Forever, the album I never got.

Same as ‘Love Thing’, until the line, ‘Do you think I’m really cool and sexy?’ No need to comment further.

I actually heard a version of this song not too long ago, when I found this excellent cover. It’s quite cheesy, but has a nice melody. I still quite like it.

Who Do You Think You Are

Ahh. I remember this one. Probably my favourite song on the album before it had been released as a single. And do I still know the lyrics? Hahaha! Don’t be silly. Of course I do. Swing, it, shake, it, move it, make it…

Yeah, I really don’t remember this one.

I may have been a naive boy, but I even with this, I assumed the title was a metaphor when I first saw that tape. Nope.

To be honest, I forgot about this one too, but when I saw it in the track listings, it came flooding back.

If U Can’t Dance

Again, a fairly forgettable tack, but not entirely forgotten by me.

Spice Up Your Life

Wasn’t certain about this when it came out. But I grew to love it. And I still do. This has now replaced Wannabe as the song that defines the Spice Girls, and that’s no bad thing.

A pure pop song. Not a horrible one, but a little generic. Will always remind me of those Quality Street chocolates.

I don’t know how my mind made that association either.

Another song I vaguely remember, but nothing concrete.

Honestly don’t have much to say about this one. I’m beginning to think I played Spice more than this album.

Never Give Up On The  Good Times

I had definitely forgotten about his song, but like some of the others, memories came back when I listened to it again.

This was the Pepsi one. Again, a song I had forgotten until I listened to it again.

Surprisingly I don’t really remember these ones at all.

This is bittersweet. Always one of my favourites, and from which comes the title of this article. I loved it then. But it was released around the same time Geri left, and so it was a little tainted by that. It is also the only Spice Girls song that has never really left me. My mum had a CD with it on, and so I’d occasionally hear it in the years after I had left the band behind.

Then I hear it again, and there is no denying it. This song is brilliant!

The Lady Is A Vamp

Yeah. Some slight jazz influences in this one, methinks. Yet another song I had forgotten about, but remembered again.

So while there are a few gaps in my memories, the majority of the songs hold that special nostalgic value. I could not hold back the smile when I was listening for the first time in twenty years. This definitely brings back happy memories. What I have realised too, is that the songs are all different. No two sound similar, and they include a mix of musical styles, pop, dance, rock, hip-hop, latin, jazz. I can’t think of many artists who did that in the space of two albums.

So, do I still think they’re good? Screw it, I don’t care whether it’s through the veil of nostalgia, I love this band. And I really should think about finally listening to Forever.

Scary. Baby. Ginger. Posh. Sporty.
Yes, now that’s your lot.
They’re the Spice Girls. Ready to go.
Ladies and gents can you please take your seats,
and we hope that you enjoy the show.